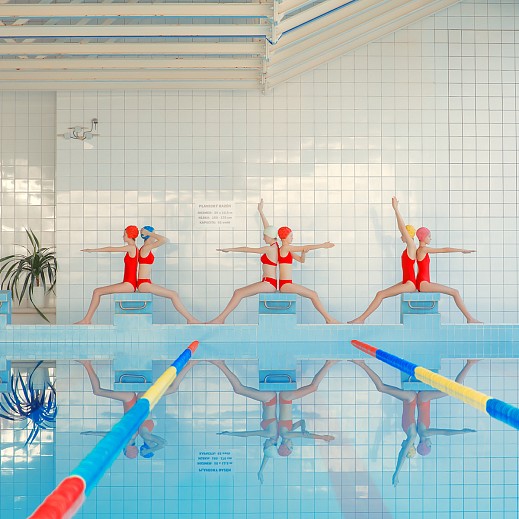 In 2014, aware of Švarbová's interest in architecture and public spaces, a friend suggested she scope out an 80-year-old pool in her hometown of Zlaté Moravce that had once belonged to a local high school. Though it had been closed for more than a decade, Švarbová was surprised to find the pool full and the space pristine.

"When I saw the first swimming pool, I was definitely fascinated by the architecture of this large open space," she said on the phone from Bratislava. "I prefer swimming pools that are old and without reconstruction. I can see a timelessness."

Švarbová said that all of the pools she photographed (13 pools in 13 Slovakian cities) were built between 1920 and 1970. Their stark colors, repetitive lines, spaciousness and lack of ornamentation exemplify the functionalist architecture that dominated the region from 1948 to 1989, when Slovakia -- then part of the former Czechoslovakia -- was a communist state.

"For me, it's sci-fi, it's futuristic," she said. "I like to combine in my work old things -- for example, (buildings) from the (communist) era -- with modern things. I would like to show people something new, where there is old and new with each other."

She enlisted models in primary-colored swimsuits to adopt angular positions inspired by the Spartakiads, mass gymnastic events organized by the communist government where thousands of participants performed routines in unison.

In post-production, bodies were multiplied, colors were enhanced and asymmetrical elements were erased. The carefully composed result is both serene and surreal; an imperfect world, unnervingly perfected.

"I like water because, for me, it's a mirror or other side of the world," Švarbová said. "My photographs are my imaginary world. I would like to show people other side of normal life."