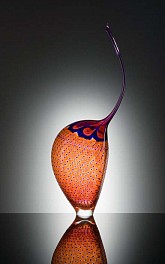 Stephen Powell was born in Birmingham, Alabama in 1951. He received his Master of Fine Arts from Louisiana State University in 1983. He has taught in several schools in the U.S. and Australia and currently is Professor of Art at Centre College in Danville, Kentucky, where he teaches glass.

Powell is best known for his very large scale, dramatic multi-colored vessels. His pieces are so large that they take a team of several glass artists to execute. In contrast to the large scale and bold, organic forms, is the delicate patterning of the colors which he achieves by laying out an intricate pattern of glass beads and rolling them onto the surface of the hot vessel.

“My work is mostly about color,” says Powell. The artists that have influenced him most are Mark Rothko, Kenneth Nolan, Claude Monet and Georges Seurat. “I am also drawn to the physicality and directness of Jackson Pollock. I was attracted to these abstract expressionists because of their search for purity of expression. They should be classified more as non-representational artists trying for the most pure emotional expression possible through color.”

The form and size of Powell’s work has evolved on a continuous basis. His early pieces incorporated a striping technique rather than the murrini. In 1985, the vessels were 18 inches in height, and the artist believed he had reached his limit in terms of how large he could work. But work larger he did.

Says Powell, “I wanted to reach a scale in my work where I felt the object was of equal stature to the viewer. I wanted the work to be able to confront the viewer.” The following year, Powell made a shift in aesthetic approach, focusing on what he wanted in the work in terms of color. Gradually he stopped striping the vessels and began incorporating the murrini. At first he picked up murrini in random patches across the surface of the piece until gradually they became the entire skin of the vessel.

“My personal biased feeling is that the art of today is the work based on traditional craft. I’ve stuck with the vessel through thick and thin despite critical and academic bias against it. The vessel may be the most pure sculptural object since it is void of artistic pretension. The rich tradition of vessels furnishes a timelessness and universality that no other object can. I never wanted my art to push the viewer away; I feel the vessel is a way to bring the viewer in,” says the artist.